20 boys, 4 teachers, 120 kilometres and 1 unforgettable week of the Easter Holidays.  I present to you the Camino De Santiago or The Way of St. James.  Our 24 strong group from St Kevin’s in Ballgall hiked, stumbled and hobbled our way through the pathways of hilly northern Spain. 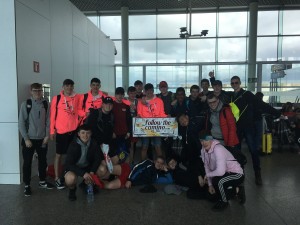 It all started some time ago when our school signed up to a competition. After a hard-fought battle and lots of whole community support – we won!  Our prize, a trip to Spain to complete the final stage of a pilgrimage.  We walked the end of the French way which brought us from a town called Sarria as far as the city of Santiago where St. James can be found (allegedly).

Each person was fuelled by their own purpose, some ecclesiastical, some for craic and some for personal reasons.  Together we pushed ourselves to new physical and mental limits. We were determined.  Throughout this journey, after talking and walking with other pilgrims – from far flung places, and even from Finglas, we realised that every pilgrim has their own reason for taking this journey.      Beginning our trek in the wasteland the locals call Sarria, walking up and down… and up and down… and up and down.  The rolling hills of northern Spain were no match for our calves as we made pace through the stunning countryside. Eachday was by no means easy but soon enough it was flying in.  Hitting the town of Portomarin, you are stopped in your tracks by the beautiful town resting on the hill. Think traditional, idyllic Spain.  No matter where we were you could look up or down to capture picturesque vistas.  That night was one to remember, there was a festival, singing, shouting, chanting.  Many voices were lost that night but all in the name of celebrating.  The days sped by, we passed Palas De Rei and Arzua.  Meanwhile no landscape, no view was left untouched by our eyes as we moved ever closer to our goal.   Finally after a week of walking through rain, hail, sunshine and even a lightning storm… we made it.  By afternoon we hit Santiago De Compostela.  Our feet ached as we flooded out into the square that lay before the Cathedral.  Collapsing down in the centre, we let it dawn on us what we had achieved, that we had walked 120 kilometres and survived.  Basking under the gaze of the steeple sat 24 exhausted survivors.  Within the church there was gold… A LOT of gold.  Behind the altar we could stroll up and give St James’ Statue a hug.  I could end it with saying, ‘and that’s the Camino’, but I would be lying.  My mere 400+ words barely show the hardships, the pain, and the glory.  This is but a snippet, it is a struggle to convey such a diverse experience in a full essay let alone a small article.  So I will leave you this, the Camino is a phenomenal experience from the friends to the strangers, from the culture to the landscape and especially your attitude to yourself and your ability.      We would like to thank our school St Kevin’s, the teachers who accompanied us – Ms O’Mahony, Ms Delany, Mr Browne and Mr Corry.  We would also like to thank our parents for encouraging us to take this opportunity. 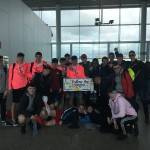 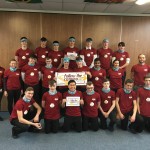 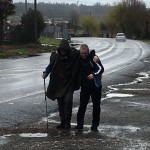