Pulsars: The True Freaks of Nature.

Pulsars are among the most exotic objects in the Universe. Until the 1960s, we didn’t know these objects existed. They have properties like no other object ever observed. They spin tremendously fast and are unbelievably dense. Some even come back to life after dying, spinning at fractions of the speed of light.

The word “pulsar” is a contraction of “pulsating star”. They are the leftovers of a star’s core after a supernova. The first was discovered by Jocelyn Bell and Anthony Hewish in 1967. They kept seeing regular blips in their data. After checking the equipment, it was clear that these blips were of extra terrestrial origin. Thinking it was an alien civilization, they jokingly denoted it “LGM-1”, Little Green Men 1. We now know that it is not aliens, but the first known pulsar.

Today we know of over 1800 pulsars in the sky, each unique in its own way. They are the remnant of a supernova explosion. Such a birth was seen by ancient astronomers in 1054 AD. A ‘guest star’ appeared in the sky in the constellation Taurus. We now know this to be the birth of the Crab Nebula, with the Crab Pulsar in its centre. The Crab Pulsar is bizarre. It has 1.4 solar masses packed into a sphere 30km across. It spins around 30 times a second, and has beams of charged particles emanating from its magnetic axis. It lights up the surrounding nebula, a mighty 6 light years in diameter, and is best seen in radio wavelengths. It has an average density of around one billion tonnes per cubic centimetre, due to neutron degeneracy pressure. This is common in almost all pulsars.

What makes a pulsar unique is its period. Size and mass are roughly the same, but each one has a different period. The slowest is about 8 seconds. The fastest? A whopping 716 times per second. Why do pulsars spin so fast? Conservation of angular momentum. When the core of a star shrinks prior to a supernova, its spin increases dramatically. The period of most pulsars is known with extreme accuracy. They rival the best atomic clocks on Earth at timekeeping. Because of this, they can be used to locate points in space, similar to GPS locating points on the ground. A map was attached to the Voyager probes, showing Earth’s position relative to a handful of pulsars, in an effort to tell extra terrestrial civilizations where we are.

Some pulsars are like the stellar undead. They stop spinning, but come back to life as millisecond pulsars. These objects spin rapidly, between 200 and 700 times a second. This happens when a pulsar orbiting another star steals matter from the companion. As matter falls onto it, it strikes at an angle, spinning the star, bringing it back to life as a millisecond pulsar, spinning many hundreds of times a second.

The pulsar PSR B1257+12 stands out from the rest. It has the first exoplanets discovered in orbit around it. They were found in 1992. A pulsar is the last place one would expect to find planets, due to the fact that the supernova that created the pulsar should have destroyed the planets. This shocked astronomers. Three were discovered. They were the first exoplanets, and also the first “Pulsar Planets”. 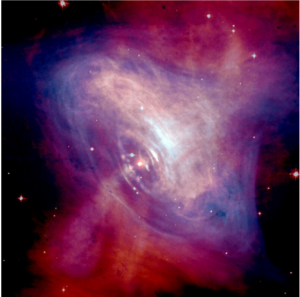 Thanks to our TY tour guides showing our 1st years

Leaving Cert class of 2020 Wishing you all the bes

A variety of parenting programmes on offer this te

Leaving Cert Class of 2020 We are thinking of you

A huge and warm welcome to our first years who arr